The Monthly Update for July/August 2012 is now available.

The release of new EMA and FDA guidances defining their expectations for assuring the quality of biosimilars has heated up the dialogue around the current state of biotech science and regulation.  The IPQ Monthly Update takes a deep dive into the key facets of this dialogue and the biosimilar regulatory issues that are on the table.

The combined July/August issue begins with a close look at the raft of comments that came in on FDA’s biosimilar draft guidances, reflecting their significance to the biotech community. The story dissects what the front burner issues are and how the various factions supported their recommendations.

A month after the comment period on the drafts ended, FDA held a public hearing to expand industry feedback. Among the focal points at the hearing was the balance point between wider patient access and safety assurance. The second story in the Update explains who spoke up at the forum and what messages they wanted FDA to digest.

EMA, meanwhile, has issued a redraft of its 2006 biosimilars quality guideline that reflects the agency’s growing experience in regulating biosimilars and the advancements of QbD in the biotech arena. IPQ provides an in-depth analysis of what was changed and why in the EMA guideline and how it compares to FDA’s version.

Like the FDA and EMA, other key regulators around the world are opening up the pathways for clearing biosimilar products.  Recent developments in Brazil, India, Japan and China are among those covered in the story.

Another story in this issue’s biosimilar series focuses on the case Sandoz is making for the power of the biotech process/product understanding that regulators and firms like itself on the biosimilar front lines have gained, and how this understanding should inform the regulatory process moving forward.

IPQ also explores Medimmune’s agreement to produce Merck’s biosimilars and what it represents for the future of biotech production and the arrangements companies are making to try and achieve their goals.

The seventh story in the issue takes a look at the other end of the challenge that biotech manufacturers face – making sure that their vulnerable products make it through the integrity pitfalls that lie en route to the patient.  The main focus is on some eye-opening revelations about repackaging practices at the wholesaler and specialty pharmacy levels that were shared by Amgen at a follow-up PDA/FDA glass conference held in June. 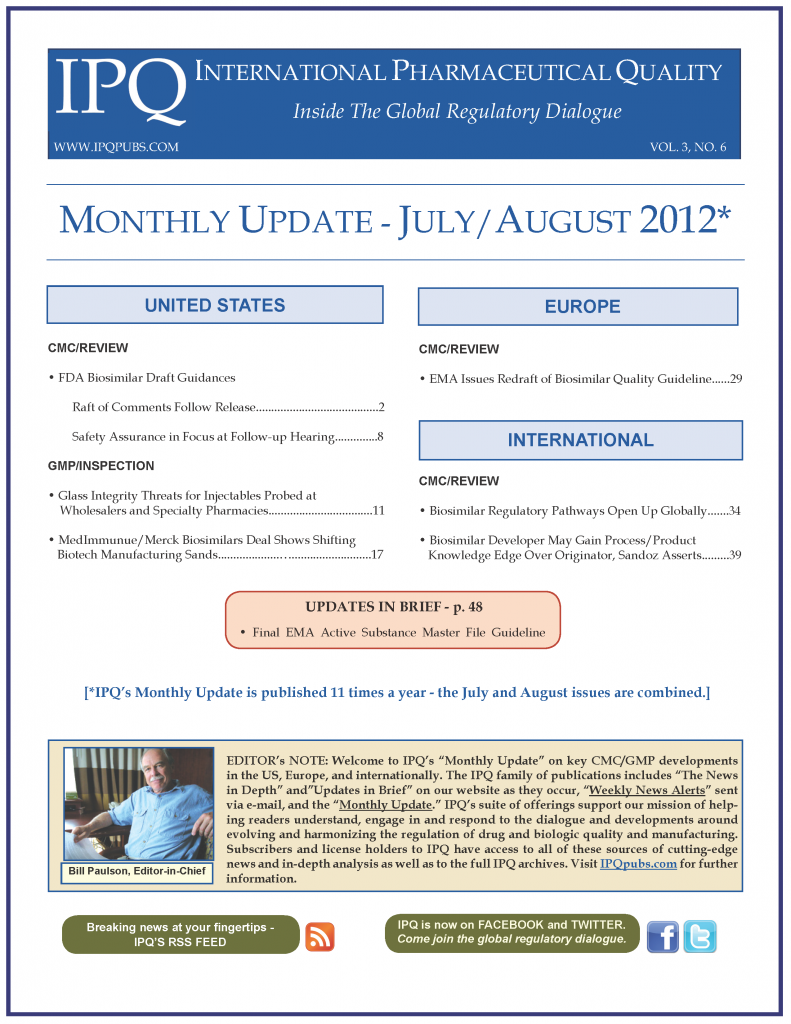