How regulators will be evaluating and enforcing quality risk management (QRM) received particular attention across the global regulatory landscape this past month.  UK’s medicines agency and WHO both released guidance addressing QRM inspection expectations – the former in the form of an FAQ, the latter as a draft guideline for comment. The September IPQ Monthly Update also includes a discussion by FDA’s drug compliance office of the pivotal role of supplier/manufacturer communication in managing supply chain risks.

Also on the GMP/inspection front, the pathways for regulatory agencies to work together continue to expand.  After a somewhat bumpy five-year application process, the door has now opened up for FDA to join PIC/S –  advancing the potential for increased harmonization and cooperation around inspections. Extending the confidentiality agreement between FDA and EMA is another indicator of a deepening international approach to the challenges of assuring pharmaceutical quality.

On the CMC side, the role of design space in the new quality-by-design paradigm continues to generate debate – how to define design space and its relationship to the control strategy and the quality system, what needs to be filed in applications, and the regulatory implication as the design space knowledge base expands.  The September issue includes an intriguing suggestion from a Canadian regulator for putting design space on a separate review track, which could allow more room for industry/regulator dialogue on the issues without delaying marketing application clearance.

FDA’s strengthened enforcement posture is illustrated in a handful of recent warning letters that went out to express concerns about sterile product manufacturing – including particle issues at a sterile contract manufacturer, microbial control at two foreign ophthalmic firms, and aseptic practices at a BMS plant in Puerto Rico. The September issue also provides an update on the McNeil/J&J compliance story.

In the CMC arena, FDA is holding a public forum to gather input on how it should implement the recently-enacted biosimilars legislation.  New agency guidance on animal drug substances and residual drug in transdermals were released.

For Europe, the September IPQ issue analyzes the problems MHRA is seeing with Type 1A variation filings, and the issues that are arising in the EU from the lack of a master file system for excipients and biologic ingredients. 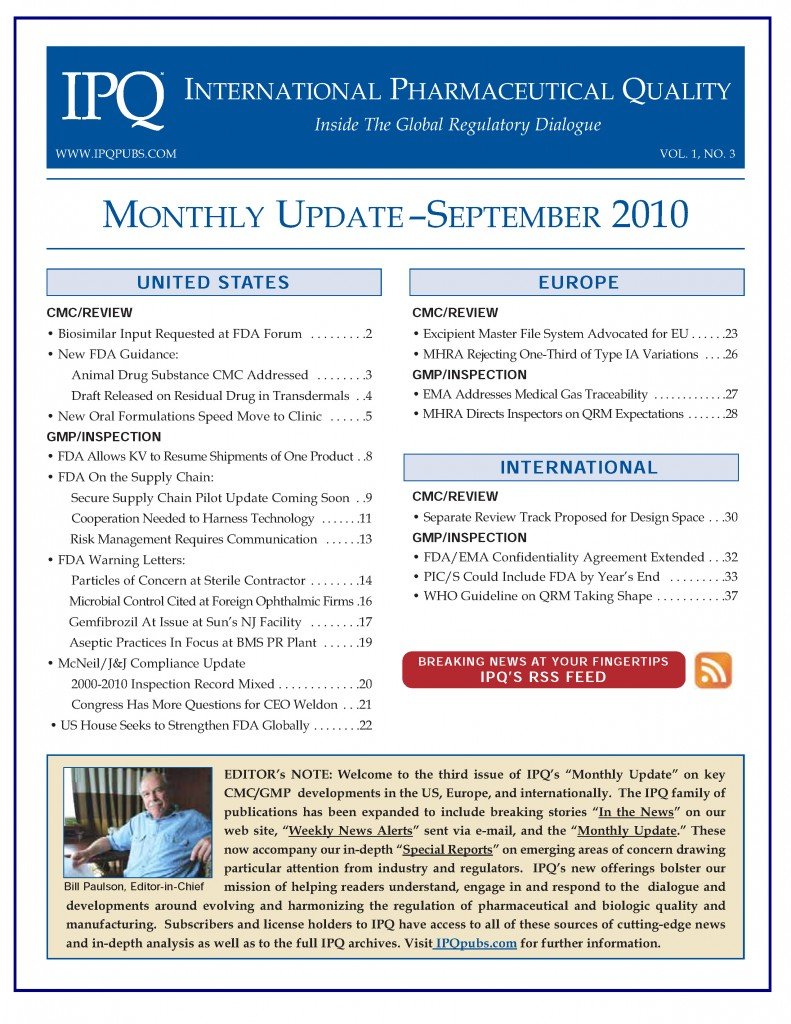 Now available, IPQ’s “Monthly Update — September 2010” on key CMC/GMP developments in the US, Europe, and internationally.