Having passed the one year mark in the implementation of generic drug user fees under GDUFA, the full dimensions of the paradigm shift in the generics review process involved are getting clearer. The GPhA/FDA Fall Technical Conference provided a forum for industry and FDA to take stock on the journey thus far and the road that lies ahead.

In the November/December Monthly Update, IPQ focuses on the key learnings from the conference – delving, in particular, into a “state of the union” address delivered at its close by OGD’s acting director Cook Uhl, who reviewed her office’s accomplishments to date, the challenges and priorities it has before it in the coming year, and the intimate role that industry has to play to make the GDUFA vision a reality. The story sheds light on the magnitude and the multifaceted nature of the task underway.

In the second story, IPQ narrows the focus onto the excipient piece of the regulatory pie and the changes that are underway there to help create a more efficient drug review process and open the gate to technological advancement.

The story takes a deep dive into FDA’s effort in conjunction with IPEC to improve the content and functionality of the agency’s inactive ingredient database (IID) – a key source of information on the accepted norms in excipient use across the spectrum of approved pharmaceuticals in the US. The story encompasses: ● the industry/regulator dialogue on the IID at the 2013 IPEC ExcipientFest Conference ● a report at the GPhA Fall Technical Conference by FDA IID working group member Bob Iser on the progress that is being made in upgrading the IID and the communication process that supports it, and ● a follow-up interview with IPEC spokesman Dave Schoneker exploring the pharm/tox aspect of the FDA/IPEC discussions, in particular.

Also prominent on the US regulatory landscape is the Drug Quality and Security Act of 2013, signed by Pres. Obama in late November – the result of a renewed legislative effort to strengthen FDA’s hand in the compounding arena that began with the tragic fungal contamination at NECC last fall.

In this issue, IPQ takes a look at the compounding provisions of the new act and FDA’s rapid move to give it regulatory flesh with a series of draft guidances and Federal Register announcements that came out in early December, only a week after the bill was signed.

The speed at which the agency is moving in the act’s implementation reflects the central place that compounding operations have occupied on FDA’s inspection and health protection radar screen over the past year.  The problems in the compounding arena have significant relevance to pharma, which should be paying close attention as the regulatory developments unfold.

On the international front, the Nov./Dec. issue explores the industry/regulator effort to develop a better understanding of the linkages between product quality and what actually happens in the patient.

The first in the pair of stories explores how the issues are playing out in the complex world of biotech product immunogenicity.

The take-off point for the story was a recent presentation by Robin Thorpe on where we are now in our understanding of immunogenicity for monoclonals, in particular, based on his extensive experience in the field as a leader of the biotherapeutics effort at UK National Institute for Biological Standards and Control. In what amounted to a valedictory address at a PDA monoclonals workshop on immunogenicity in September, Thorpe explained Europe’s current regulatory approach, which he has played a key role in developing, and gave valuable advice on what companies need to be doing to make sure the approval process goes smoothly for new monoclonals and changes to processes as well as in the thorny realm of comparative immunogenicity for biosimilars.

The second story builds off of insights provided by Lilly’s John Ayres, who has been at the forefront of consciousness-raising around what it takes to be able to make the quality/clinical connections and how to develop strong feedback loops that can be used to improve manufacturing processes and product design.

In a presentation at a PDA interest group that he leads on “GMP links to pharmacovigilance,” Ayres focused on how to set up systems that increase the likelihood of finding and understanding the signals from clinical and customer data that point to potential manufacturing and quality issues.  The story also encompasses the discussions that flowed out from Ayres’ talk regarding the clinical significance of particulates. 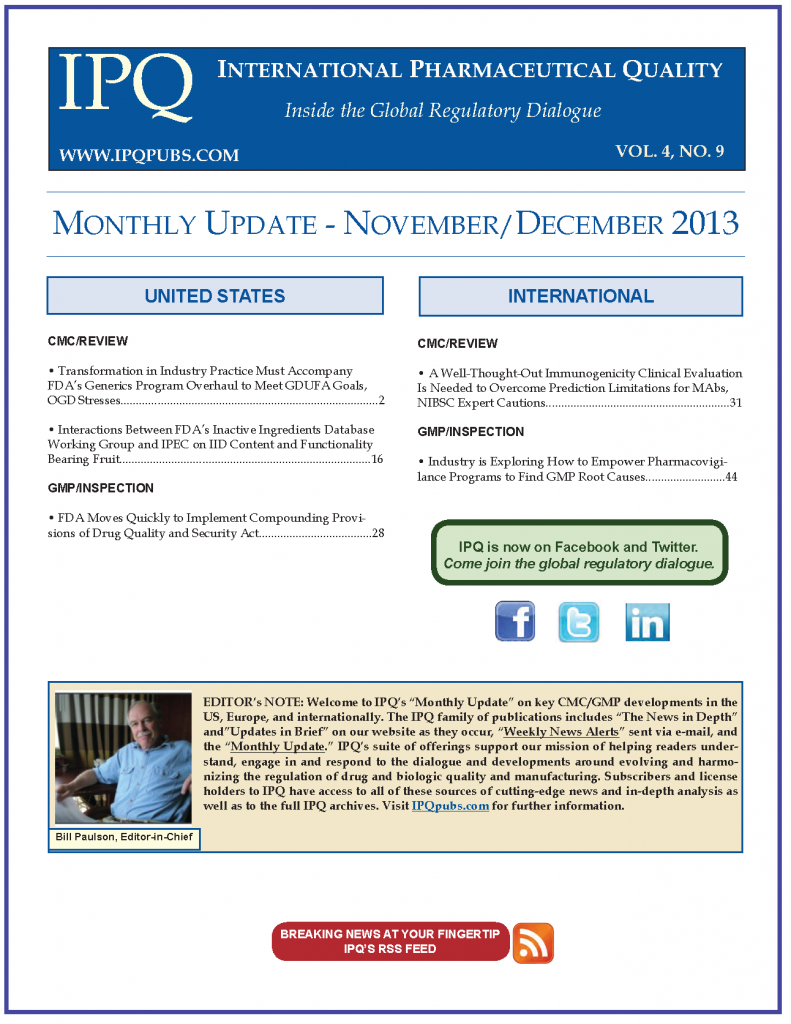