Due to the critical nature of the compounding crisis and to help facilitate the dialogue around how such tragedies can be prevented in the future, IPQ is making this report publicly available beyond its subscription/licensee base.

In this Monthly Update, IPQ departs from its usual format encompassing the CMC and GMP developments in the U.S., Europe, and internationally to provide a special report on the causes of the health crisis that has unfolded from fungal contamination in pharmacy-compounded injectables and the far-reaching implications that extend across the U.S. drug regulatory arena.  Due to the critical nature of the compounding crisis and to help facilitate the dialogue around how such tragedies can be prevented in the future, IPQ is making this report publicly available beyond its subscription/licensee base. See below to download the report in full.

● The anatomy of the crisis:  How the meningitis outbreak due to contamination in methylprednisolone compounded by NECC spurred a review of compounding pharmacies and their regulation; the implications for pharma companies; how the crisis was foreshadowed and forewarned by visits from state and federal agencies that produced disturbing findings; and what Congress is doing to help give FDA the tools it needs to protect the public health.

● The long history of compliance problems that NECC had prior to the health crisis.

● Recent state actions regarding sterile compounders: including the state of Florida shutting down the compounding pharmacy Rejuvi for sterile processing concerns, and Ohio and Massachusetts stepping up inspection frequency of compounders and tightening the regulations governing them.

● The related case of Franck’s and the Florida court: the death of 21 polo horses in 2009 due to the administration of a drug compounded by Franck’s pharmacy in Florida that was unapproved in the US; the subsequent 2011 court decision that thwarted FDA’s efforts to shut down the compounder; and the 2012 FDA warning letter to Franck’s due to unacceptable sterile control practices followed by the subsequent recall of all its products and the closure of the facility.

● Further risks of pharmacy compounding and repackaging: explored in the context of Florida-based Infupharma – which along with NECC was repackaging the Genentech cancer drug Avastin into single-use syringes for eye surgeries – and the dangers that a lack of control in environmental testing and personnel training along with lax testing and equipment calibration can produce.

● Other lethal control breakdowns: including the perspective of the Centers for Disease Control on the causes of contamination outbreaks, and insights by FDA sterility expert Richard Friedman and other experts on the causes of the outbreaks and the real size of the compounding problem.

● FDA policy and USP standards that have sought to define the activities that compounding pharmacies can engage in. These efforts range from an FDA compliance policy guide published in 2002 to updated USP standards in 2008.  Among the regulatory issues of concern is the lack of control by many large compounders over the quality of their ingredients and the lack of finished dosage testing. Also included is an update on PET drug regulation as a special case in the pharmacy mix.

● The current dialogue on what authorities FDA now has and how the gray areas between its authorities and those of the states need to be clarified.

● Fungal contamination among pharma manufacturers: where it has occurred recently and how the regulatory safety net helps prevent the public health from being jeopardized.

Due to the critical nature of the compounding crisis and to help facilitate the dialogue around how such tragedies can be prevented in the future, IPQ is making this report publicly available beyond its subscription/licensee base. 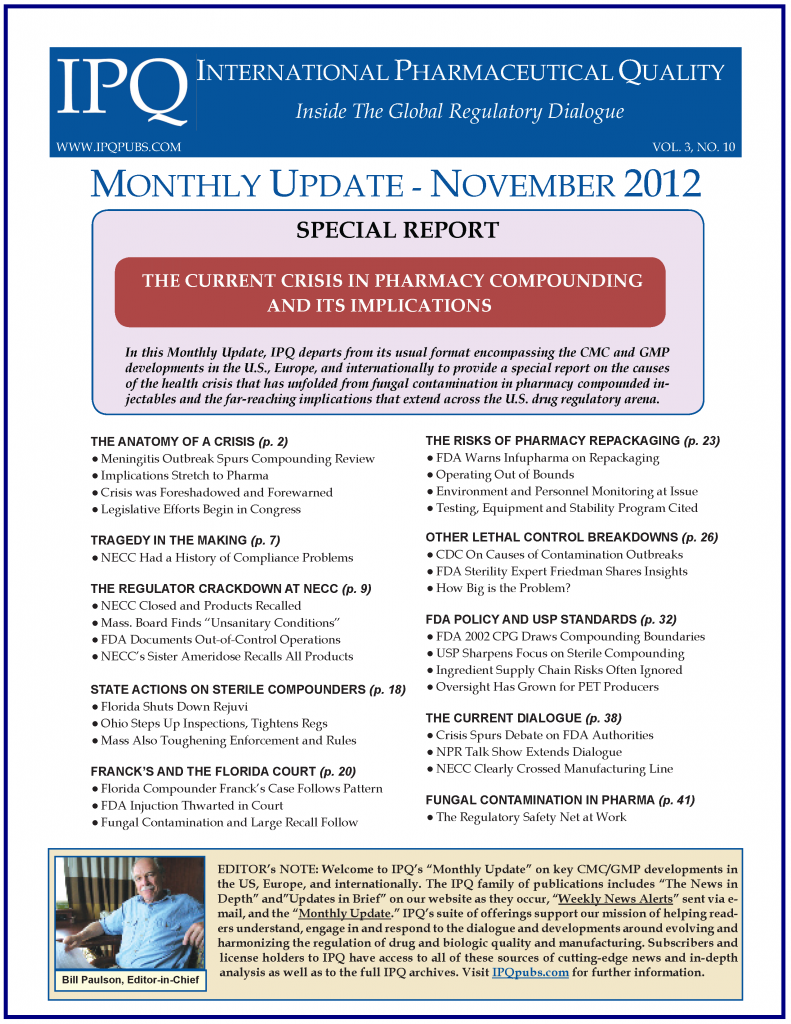