China’s CMC and GMP landscape is changing, providing opportunities for the global pharmaceutical community to help shape the outcome.  The Monthly Update for November includes a series of four in-depth stories based on the insights provided by key regulatory experts on China at the AAPS and ISPE annual meetings this fall.

In focus are the GMP regulatory developments as highlighted at the AAPS and ISPE sessions by a primary author of China’s new GMP rewrite, ShFDA’s Hua Zhang. The Chinese regulator provided valuable insights into SFDA’s efforts to upgrade its GMP standards and domestic and international inspection program to better match the current international bar set by the US, Europe and ICH.

The issue also includes three stories delving into key aspects of China’s CMC review component and international pharma’s perspectives provided by Pfizer expert and former FDA top review official Chi-Wan Chen. The stories cover: ● hurdles to the acceptance of QbD in China ● SFDA’s efforts to modernize and harmonize its filing requirements and the role international pharma can play, and ● issues with an API/auxiliary materials draft regulation.

Another provocative set of conferences this fall in the US and Europe brought industry and regulator quality management together to assess how far quality systems have evolved and where the obstacles to further progress lie.  The November issue includes the second IPQ story from the ICH Q10 conference, which provides the valuable insights of a veteran MHRA inspector and GMP policy-maker, Ian Thrussell, on evaluating a company’s quality culture and the key indicators that inspectors focus on to judge its health. [Editor’s note:  The first story from the quality systems conference, included in the October Monthly Update, addressed the dichotomy of the continuous improvement mantra in Q10 and the constraints of global change filing requirements (IPQ Monthly Update – October, 2011, p. 22)].

Two other stories in the issue highlight Europe’s efforts to combat drug counterfeiting, including: ● a European Commission concept paper on safety features to support its falsified medicines legislation, and ● the Council of Europe’s “Medicrimes Convention,” which provides for a ramping up of the criminal and monetary penalties for drug counterfeiting.  The latter story encompasses parallel legislative efforts under way in the US and EDQM’s “eTACT” initiative to harmonize serialization in Europe.

Another two stories in the issue address the continuing refinement of the review processes and standards to help support the shift to the QbD paradigm: ● USP’s initiative to advance its monoclonal guidance, including a new mandatory chapter on defining MAb critical quality attributes, and ● the multifaceted effort at ONDQA, which includes pulling in academia to help expand the QbD horizons.

While the new paradigm vision remains fully alive at EMA as well, the agency is taking a hard look at what adjustments it needs to make to its “vision” in the face of funding “reality,” as the IPQ coverage explains.

Also in the limelight recently is the increasing cooperation between FDA and EMA, as the two agencies pit their limited resources against the daunting challenges of global supply chain regulation.  Our story examines how this cooperation has played out in assessing and responding to the GMP compliance issues at Ben Venue, which during November included a joint inspection including European and FDA investigators.

IPQ attention turns again to ICH Q11 as it nears its final form, with an analysis of the changes that the Expert Working Group (EWG) has incorporated based on the public comments.  The story reports on a presentation at the APIC meeting in Munich by ICH rapporteur Brian Withers, who had just returned from the ICH meeting in Seville, Spain where the EWG had a chance to make it final changes en route to the Step 4 signoff by the regional regulatory authorities.  Withers gave a revealing look into the decision-making process the EWG went through in deciding what it wanted to change in the draft and why. 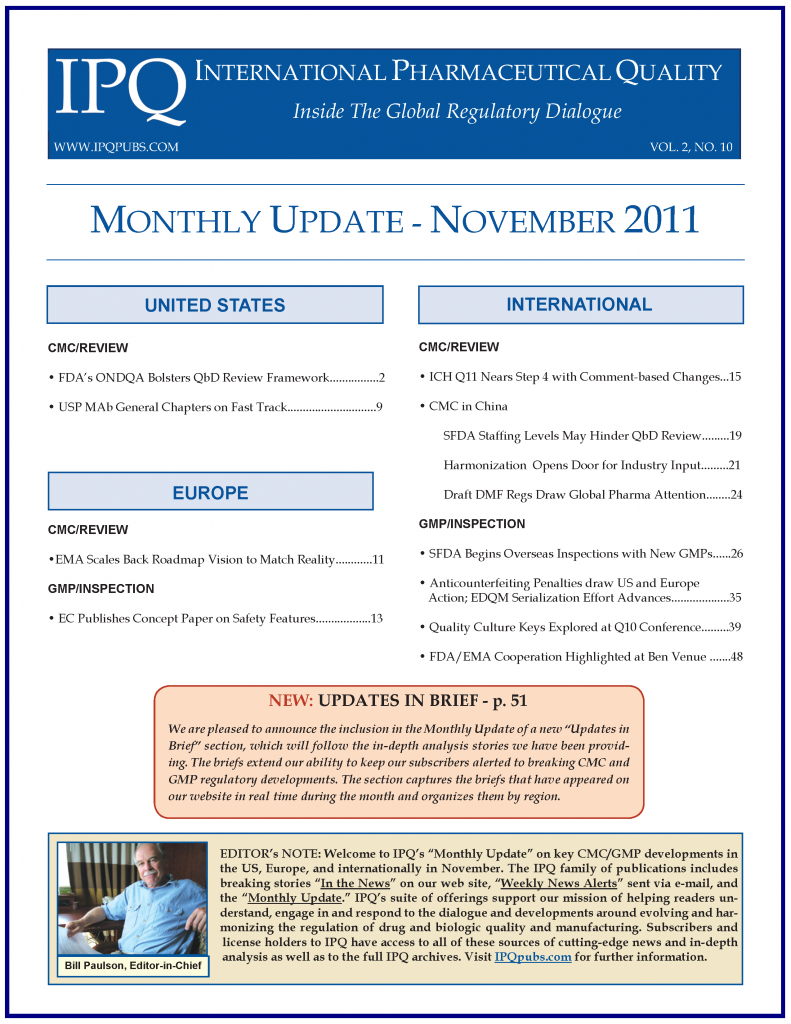