Funneling from what investigators uncover on the shop floors through FDA’s compliance management to company executives, the concerns addressed in the warning letters indicate where the greatest risks to product quality lie across the industry and where the agency will, in turn, be placing its attention to try and get them addressed. In one sense, warning letters reflect FDA enforcement priorities – in another, they drive them.

Funneling from what investigators uncover on the shop floors through FDA’s compliance management to company executives, the concerns addressed in the warning letters indicate where the greatest risks to product quality lie across the industry and where the agency will, in turn, be placing its attention to try and get them addressed. In one sense, warning letters reflect FDA enforcement priorities – in another, they drive them.

The Monthly Update includes an in-depth analysis of the 2012 to Q1 2014 drug GMP warning letter cohort, which appeared as a four-part series during March and April.

The first, overview story explores what the warning letters reveal about FDA’s heightened enforcement emphasis abroad and the agency’s focus on foreign laboratory practices, in particular. The analysis encompasses insights from some of the key regulators involved in the international inspection effort.

Included is a chronological listing of all 92 of the drug GMP warning letters issued between the beginning of 2012 and the first quarter of 2014, categorized into US and International. The key concerns that each of the warning letters address and links to the letters themselves are provided.

In the next three stories in the series dive deeper into other salient aspects of the 2012-2014 warning letter cohort:

● an upsurge in FDA’s findings of data integrity issues, particularly in India – where the problems have been uncovered, what they look like, the heavy impact on the firms involved, and what advice regulators from the U.S. and Europe are giving to avoid them.

● a notable increase in enforcement attention on incoming component testing and on OTC topical manufacturing, and

● the bolus of warning letters that have been issued in the first quarter of 2014 to sterile compounders in the wake of FDA’s inspection blitz and legislative empowerment in the compounding arena during 2013.

The compounding warning letters follow passage by Congress at the end of last year of the Drug Quality and Safety Act, the first half of which was focused on clarifying and strengthening FDA oversight of what has become an important sector in the delivery of sterile products to patients in the US. IPQ’s coverage in the November/December Monthly Update included an analysis of the draft guidances that FDA moved quickly to release related to implementing DQSA’s compounding provisions and giving flesh to the “outsourcer” category the legislation created.

In this issue, we bring our readers up to date on recent developments in the compounding arena, including:

● The wide array of comments that have come in on the FDA draft guidances and Federal Register notices related to DQSA implementation, which reflect the complex factors and varied stakeholders that need to be considered in advancing the regulatory processes for compounding, and

● Insights on the compounding drivers and problems from a Merck pharmacist with extensive experience both in drug manufacturing GMP and hospital compounding. At PDA’s annual meeting in April, he gave a ground floor view of the forces at play – from lack of training in pharmacy schools to cost pressures that create drug supply shortages and force hospitals to rely on less qualified providers to fill their immediate patient needs.

The final story shifts focus over to Europe where efforts continue to update CMC and GMP expectations for process validation and other quality guidelines to better reflect the principles in ICH Q8-11.

On the CMC side, the redefinition of process validation as a “lifecycle” continuum extending from development through post-marketing, as manifested in FDA’s PV guidance, is an effort to create better alignment with the evolving quality management paradigm. Industry sensitivity to the application filing requirements is clear in the comments EMA received on the draft of a PV submission guideline the agency released in 2012. In this issue, we take a look at the impact those comments had on the final draft that emerged in late February.

The story also reviews the newly released revision of EU GMP Annex 15, which covers Europe’s expectations for qualification and validation from a GMP vantage point. The changes made to bring the annex into better alignment with the advancing quality management concepts are explained. The story includes a review of the other EMA quality guidance initiatives that are nearing completion under the direction of the agency’s Quality Working Party and Inspectors Working Group.

The Monthly Update for March and April also includes about two dozen “Updates in Brief,” intended to keep IPQ subscription/license holders current on developments around the world and complement our in-depth analysis. The briefs link to the documents they address and cross-link to relevant IPQ stories to fill in the context. 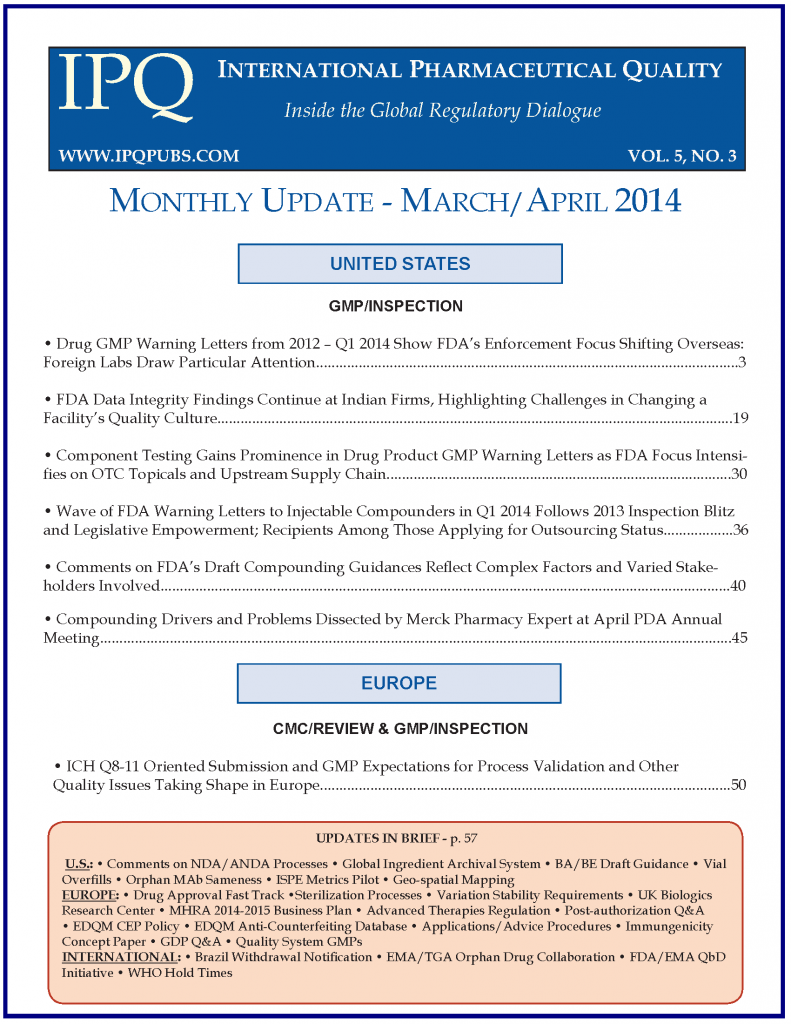