The issue begins with an update on the FDA/industry partnership being coordinated by drug data manager IMS called the “Accelerated Recovery Initiative,” which is intended to help forecast, prevent and mitigate drug shortages. Included are insights from IMS and GPhA officials on the initiative’s process, goals and progress.

Two other stories focus on the compliance problems of contract manufacturing and the steps regulators are taking to deal with them.

To help improve the relationship between sponsors and contract manufacturers, an FDA cross-center working group has developed a draft guidance on quality agreements that is nearing release.  The IPQ story provides comments from an FDA field official involved in the drafting process.

Also provided in the issue are insights from expert drug investigators at FDA and MHRA, gained through their inspections of contract manufacturers, about the difficult regulatory balance between GMP enforcement and drug shortage prevention. They highlight the importance of the sponsor/contractor relationship and a growing trend of pushback from the contract manufacturer when the sponsor is not doing their part in the communication process needed to assure quality compliance.

The relationship between hospitals and the large suppliers of compounded sterile products they rely on raises the problems to yet another level – with fewer protections built in and a lot less regulatory oversight.  The March issue provides a series of four stories updating on how FDA, Congress, the states and other stakeholders are trying to fill in the large gap in the downstream drug distribution regulatory process that the pharmacy compounding crisis has brought into high relief.

While the gap is apparent, crafting a viable way of filling it is proving to be a complex puzzle with less than well-defined pieces to work with and significant resource constraints to factor in at both the state and federal levels.

The first story focuses on the views stakeholders have on what a new regulatory framework for pharmacy compounding should look like and the Senate’s efforts to knit those viewpoints together into viable legislation.

The second story takes a look at what the states have been doing to get a better grip on compounding operations.  The state crackdown includes a combination of stronger regulations, more frequent inspections and aggressive enforcement, and a better understanding of the operations of compounders that sell within their borders.  Drawing particular attention in the story is an effort by Iowa and the National Association of Boards of Pharmacy that will help build the understanding and the bridges necessary to address an interstate problem.

In the third of the series, attention is turned to the FDA and the heavy lifting it is doing at the national level while it looks for better leverage from legislators.  A letter from CDER Director Janet Woodcock to one of the large national suppliers of intravenous preparations to hospitals, PharMEDium, indicates that the agency wants to see product/patient linkage, since it is critical to tracking quality problems and minimizing the health consequences.  Explored in the story is how the compounding issue fits in with the larger problem of controlling quality downstream from the drug manufacturer all the way to the patient – a problem regulators and pharma are focusing harder to understand and address.

FDA, meanwhile, in late February launched an inspection blitz of about 30 large-scale sterile compounding operations. IPQ provides an analysis of the 14 FDA 483s that have already been released from the first two weeks of the inspection crackdown. They show a clear pattern of weakness in environmental monitoring, gowning, personnel practices and sterility/endotoxin testing, in particular.

The “Updates in Brief” section includes coverage of the recent recalls of a variety of injectable products due to sterility concerns produced by compounding pharmacies in Georgia and New Jersey. The New Jersey-based compounder recalled all of its products after reports of visible mold in five bags of magnesium sulfate products.  Genentech’s Avastin prepared for off-label ophthalmic use was again implicated at the Georgia operation as it was in the compounding problems that drew FDA warning letters at the New England Compounding Center in 2006 and Infupharma in 2012.

Three other briefs focus on API and other supply chain developments, including: ● the applications pending at the European Commission from six countries including the US for listing for API import into the EU under the Falsified Medicines Directive ● an API switch in OTC cough syrup that has a death toll of at least 60 in India and Pakistan, and ● SFDA’s release of a revised “Good Supply Practices” guideline. 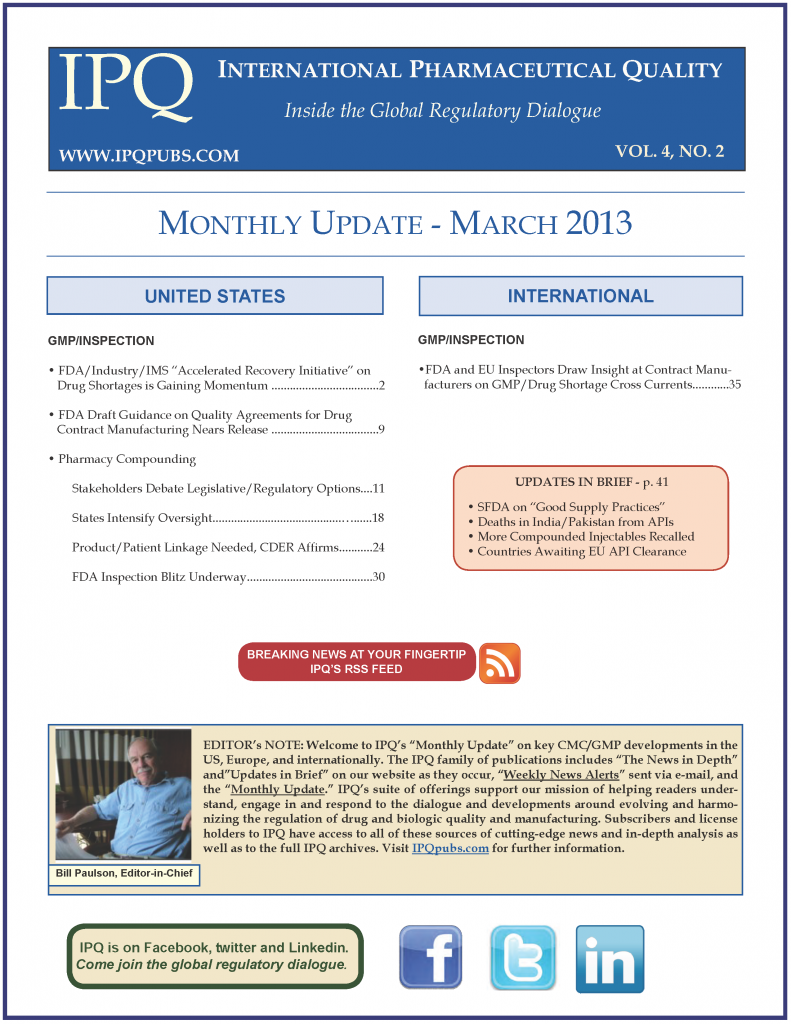