FDA’s center for drugs recognizes that deeper changes to the quality regulatory paradigm are needed to realize the vision embodied in the 21st Century initiative a decade ago of a pharmaceutical industry set on a pathway of continuous process improvement throughout the product lifecycle.

The first in a series of three stories in IPQ’s June Monthly Update focuses on a pivotal presentation by CDER Director Janet Woodcock in early June in which she described the depth and breadth of the challenge and her office’s effort to meet it. Woodcock reviewed: ● the “historical trajectory of FDA quality regulation” ● where the agency has succeeded and fallen short in realizing its 21st century vision ● what the obstacles are, and ● what the agency is now doing across the CMC and GMP arenas organizationally and policy-wise to overcome them.

The stories that follow focus on two important components of the CDER quest: the development and deployment of quality metrics; and the refinement of the question-based review (QbR) approach and its expansion from generics to innovator applications.

CDER is now actively dialoguing with industry on what quality metrics would provide the most leverage in helping reset the regulatory dial toward more improvement flexibility and better risk management. The IPQ story encompasses: ● the response to a March FDA Federal Register request for input ● an in-depth presentation by CDER’s Russ Wesdyk in early June on the drivers for developing quality metrics, which ones could be in scope, and how they could be used to help advance the cause, and ● follow-up discussions at an ISPE/FDA cGMP forum a fortnight later.

The third in the series updates readers on a proposed revision of the QbR questions, intended to further clarify the QbD and control strategy information the agency wants to see in generics applications while at the same time bringing the QbR system into the innovator world. The story includes insights from the leaders of the working group developing the draft QbR rewrite and an annotated look at the current version nearing release. The initiative has potentially far-reaching implications and could open avenues for refining the ICH CTD model internationally and arriving at a more process-improvement-friendly and harmonized CMC submission paradigm.

On the international front, quality defect reports that are coming in to regulators in both Europe and the US are spotlighting packaging and labeling as a notably prominent problem area in the pharma manufacturing arena.  The IPQ story focuses on a revealing analysis by the Irish Medicines Board of the defect reports they have received in recent years and the light they shed on: ● the root causes of the packaging and labeling problems that firms are experiencing, and ● what can be done to avoid them. 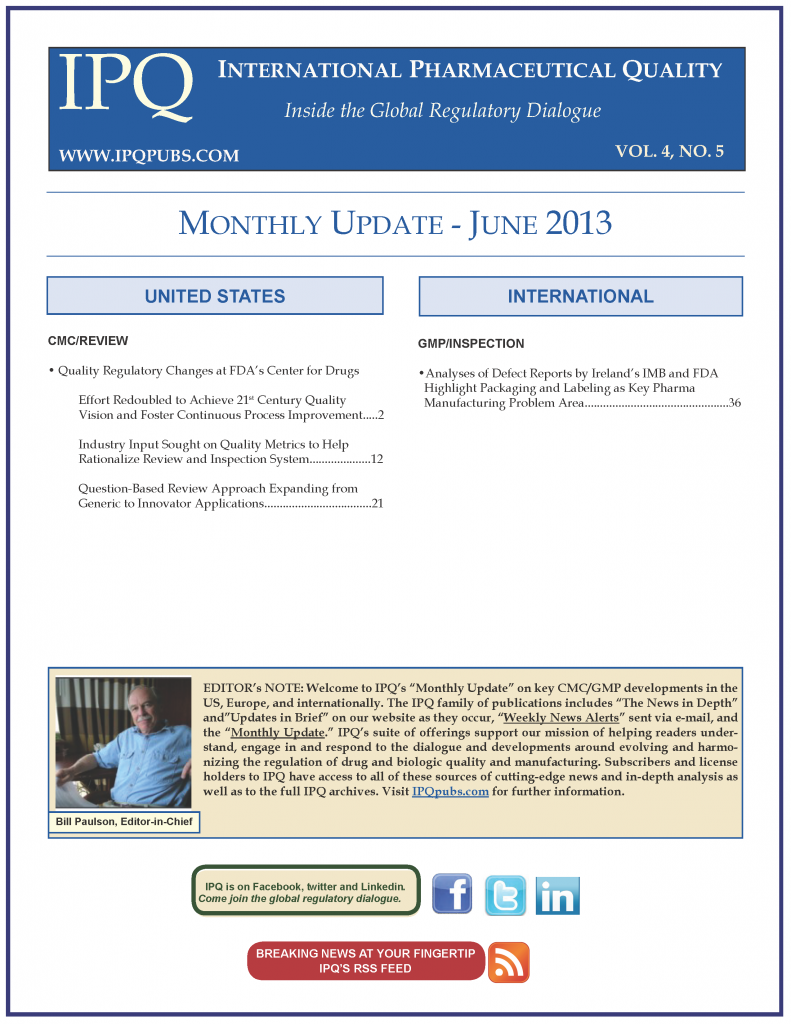