The Monthly Update for June covering CMC/review and GMP/inspection topics is now available.

Innovator companies have been advancing their QbD programs and these efforts have been finding their way into marketing applications.  One of the companies that has been most aggressive and successful in moving down the QbD pathway, as IPQ’s June Monthly Update chronicles, is Vertex – an innovator that uses contractors to do all of its clinical and commercial manufacturing, from bulk production through final packaging.

The June Update includes a series of stories covering three aspects of this virtual firm’s experience:

● the communication pathways that had to be opened with its CMO partners to achieve the QbD objectives for Incivek and its other newly approved drug for cystic fibrosis, Kalydeco, and

● its pursuit of biopharm modeling and continuous manufacturing to help spur its drug development and QbD program in the future.

The details of the Vertex QbD effort were brought to light at a recent symposium held by the International Consortium on Innovation and Quality in Pharmaceutical Development, or “IQ Consortium” in short.  The June issue includes an update on the ground this new important industry player in the regulatory arena has already covered in its first two years and where it is heading.  IQ  has just spun off a foundation to attack the inefficiencies and limitations created by the current disconnects and linkage gaps in pharmaceutical analytical lab data and reports by developing a common format, as the story explains.

The extended US CMC/review section in the June issue begins with an update on what FDA wants to see regarding human factors analysis in its review of pre-filled syringes and other drug/device combination products.  The expectations have been evolving and pharma is getting more comfortable as it gains experience in addressing this challenging component of the device regulatory arena.

Also provided are insights from an “ask the regulator” session at the recent AAPS National Biotech Conference on some of the CMC issues that biotech firms are currently wrestling with, including expectations for pre- and post-change lot comparisons and for PEGylation analysis.

On the US GMP side, the June issue includes a compelling cautionary tale being told by Genentech of a pair of contamination events that the firm experienced in its Rituxin cell culture process with the bacteria Leptospira.   There is a lot to learn from the biotech manufacturer’s intensive investigations into the causes of the problem and the firm’s efforts to protect against its recurrence, and Genentech is openly sharing its experience so that these learnings can take place and the science advance.

Featured on the international front is an analysis of how the door has been opened for China to become a major player in the global marketplace for vaccines by its internal CMC and GMP regulatory upgrades and WHO certification.

The Updates in Brief section of the issue addresses: ● the refinements ISPE has made in its mission ● MHRA and EMA inspection findings, and ● Russia’s preference for release testing in the EU. 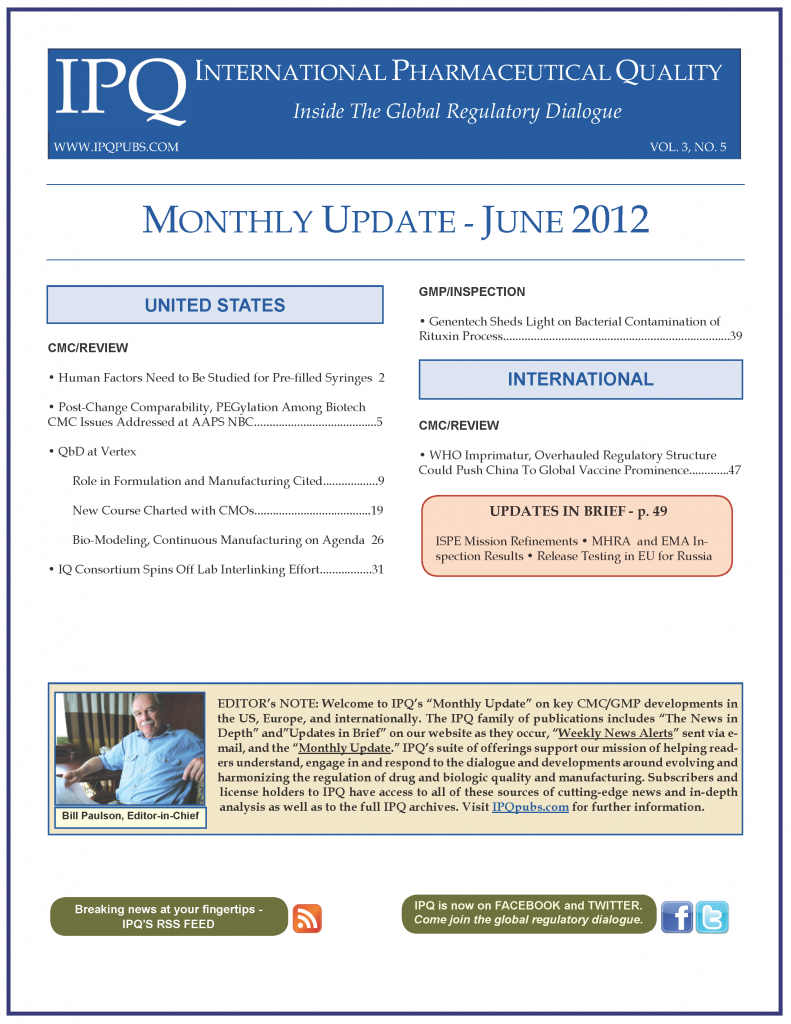