Included in the July/August Monthly Update is coverage of two significant developments in Europe’s effort to improve its regulation of the globalized supply chain: ● the implementation of the API import provisions of the Falsified Medicines Directive (FMD), and ● the revision of its GMP Annex 16 on QP responsibilities.

The FMD implementation process has led EMA and its member states to gain a much deeper understanding of the global API supply chain and has strengthened the communication channels between the countries that participate in it.   The IPQ story includes insights from key European officials on the learnings that have been forthcoming as the API import provisions come into effect.

The FMD is significantly impacting all the players in the API chain including regulators, manufacturers and distributors. As with FDASIA in the US, there is a lot in the directive to digest, and the IPQ coverage is intended to make the digestion process a bit easier.

Europe’s QPs are very much caught up in this increasingly complex, global supply chain web and the expanding regulatory oversight it is drawing. Understanding the growing dimensions of the QP’s challenge, EMA has revised its Annex 16 to help clarify how this challenge can realistically be met.

The IPQ story provides insights from a European regulator involved with the revision process on the changes that were made to the annex and why.  The insights should help in the comment process now underway, and there are issues and learnings in the debate on the role of the QP that are universally applicable across the international arena.

In the May issue, IPQ delved into the growing problem that the global pharmaceutical industry is facing with multiple agency inspections of the same site.  We discussed the effort underway by companies, associations and regulatory agencies to better understand where the differences and redundancies lie and find a pathway to a more efficient, effective, and risk-based international approach.

In this Monthly Update, IPQ digs into a corollary of the problem – the increasing burden of pre-inspection submission requests from agencies outside the US and Europe as part of their expanding GMP oversight efforts.

Firms are finding that the pre-inspection requests for manufacturing and facility information are often not well defined, do not correspond with what is normally prepared, and lead to misinterpretation and additional follow-up – in effect, that they can be more burdensome than the inspections themselves and are diverting valuable quality resources from more productive activities. The story highlights what the situation looks like from the vantage point of a central pharma facility in Germany, and what a key official involved is suggesting could be done to improve it.

Also on this issue’s radar screen is an effort nearing completion to convert IPEC’s excipient GMPs into a risk-based, quality systems-oriented standard that industry and regulatory agencies worldwide can use in evaluating, auditing and certifying excipient manufacturing and quality.

ANSI NSF-IPEC 363 is being developed under the auspices of the standard-setting organization NSF International, with the participation of IPEC, FDA, excipient suppliers, and pharma users. The story explains why the new standard is important and how it fits with the effort of the international pharmaceutical community to bring excipient control more squarely into the regulatory fold in a way that is manageable and efficient for all involved and in line with ICH Q8-10 principles.

FDA investigators continue to find themselves inside manufacturing operations in which the basic integrity of records, procedures, and inspection interactions can’t be taken for granted.  The July/August Monthly Update takes a look inside three such operations in India, where the problems continue to be particularly acute. The FDA findings at the three Indian facilities resulted in warning letters over the past few months detailing an eye-opening array of integrity concerns. The story includes an update on the high-profile Ranbaxy case, along with insights from a British regulator on MHRA’s findings of integrity problems at an API facility in the US.

Defect reports are gaining increased attention from FDA and other regulatory authorities as an important indicator of where the primary GMP trouble spots lie and enforcement resources should be placed.

In the June Monthly Update, IPQ focused on a revealing analysis by the Irish Medicines Board of the defect reports it has received in recent years, which sheds light on the root causes of the packaging and labeling problems that firms are experiencing and what can be done to avoid them.

The July/August issue follows up with a report on: ● what FDA has learned in its mining of the data from Field Alert Reports (FARs) and related recalls, and ● the electronic FARs pilot the agency now has underway to improve defect communications and further leverage the value of the reporting process. 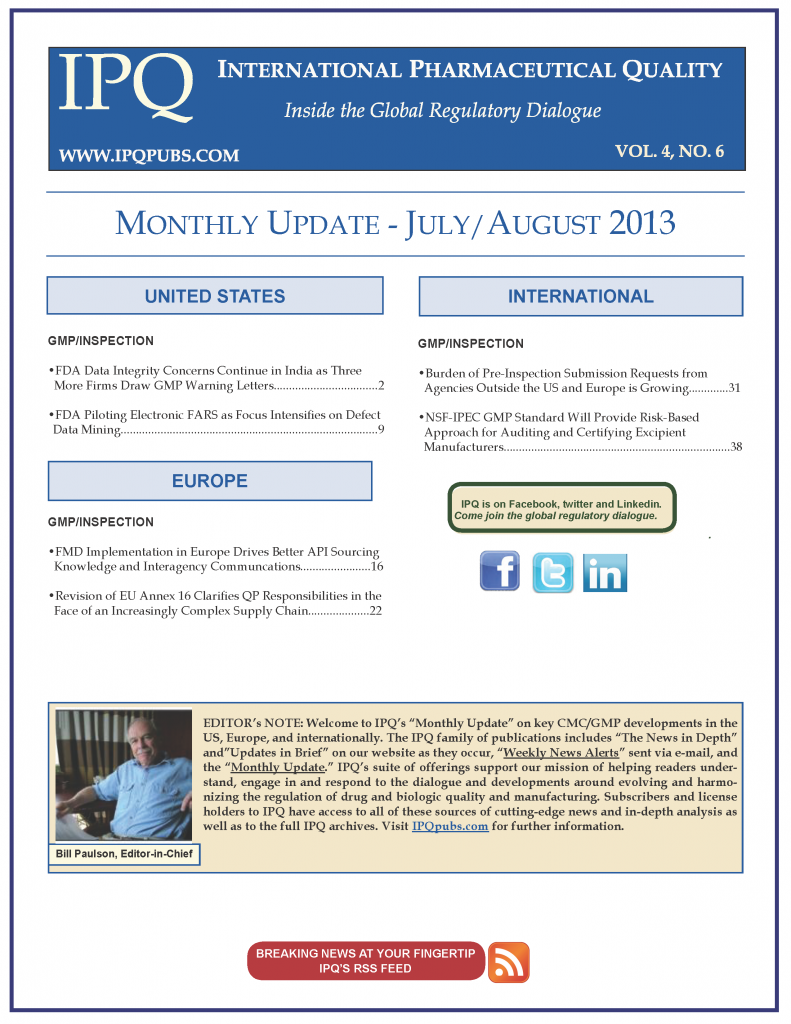