The threats that loom along the global supply chain to the quality of the products that patients receive are emerging into clearer relief, and countries around the world are taking some significant steps to address them.

A prime mover in the international effort to understand and fill the regulatory gaps is the Asia Pacific Economic Cooperation (APEC) organization, which is attacking the supply chain problems on nine separate fronts ranging across the GMP/GDP/import/traceability/pharmacy/internet spectrum.  Linking up on the effort with the 21 Pacific rim member countries in APEC are the EMA, USP, EDQM, WHO, Rx-360, and GS1.

The July Monthly Update reviews the progress of the initiative’s “roadmap” on its various fronts. The initial gap analyses have produced some surprising findings of divergences in country supply chain regulatory policies – the US allowance for repackaging and internet sales, and the lack of connection elsewhere between customs offices and health agencies, among them.

Another story explores how the pharmacopeias themselves around the world are responding to the pressure to speed up their efforts to harmonize and modernize the compendial standards that support the supply chain regulatory agenda. The story takes a look at the roles that the USP, the ICH-derived Pharmacopeial Discussion Group (PDG), and Chinese and other Asian pharmacopeias are playing in the search for a pathway forward toward more global, scientifically-current monographs that are responsive to the global QC/QA challenges.

Also provided is an update on what the US is doing to develop a coherent track and trace system following the Congressional mandates in the late-2013 Drug Quality and Safety Act.  The story encompasses some very valuable insights and advice on getting prepared from a senior player in the FDA DQSA track and trace implementation process.  Her signposts are particularly important to heed since the initial Jan. 1 implementation deadlines are looming and FDA won’t be able to give its formal regulatory directions until a month before.

The additional two stories in the July Update provide insights from a knowledgeable reviewer on FDA’s microbiology staff on current issues that the staff is dealing with.

The first of the two provides an analysis of the top 10 problems in micro submissions that are resulting in information requests and deficiency letters and advice on what sponsors need to submit to fill the gaps.

The companion story contains some valuable advice on getting new micro technology cleared, with case studies that underscore the points.  Explained are how and why the agency is supportive of company efforts to keep up with the advancing science post-approval – industry fears to the contrary notwithstanding. 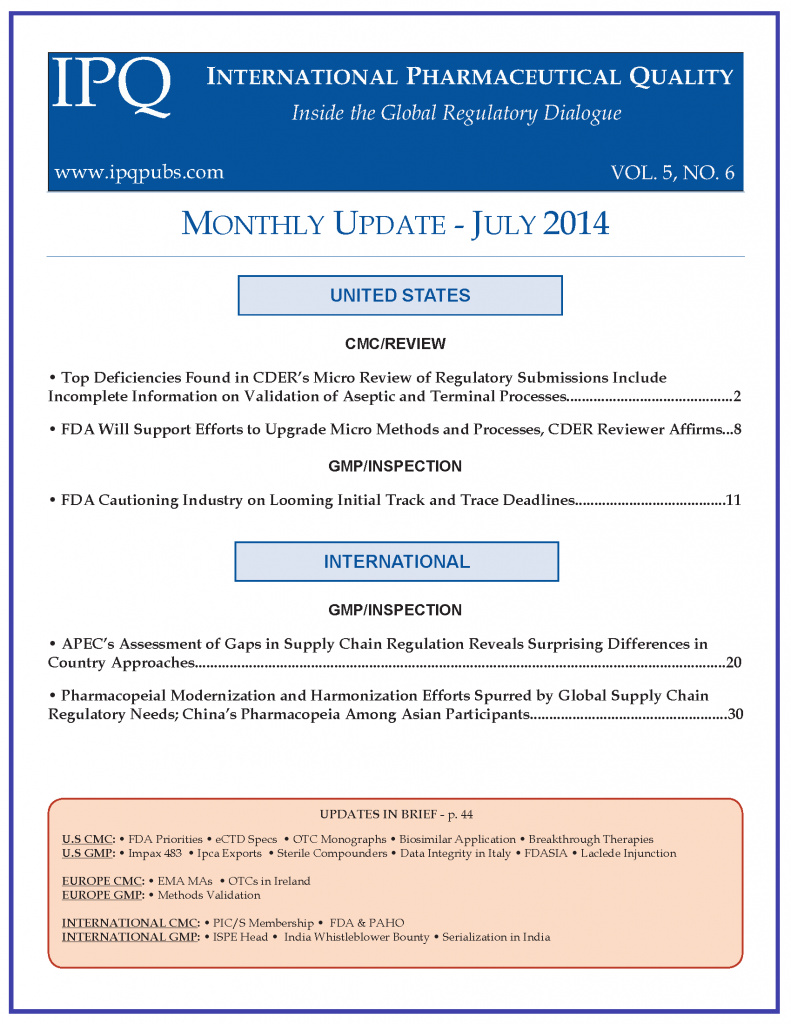