The effort by industry and regulators to develop a better understanding of the connection between product quality and what actually happens in the patient remains on the IPQ front burner, as the Monthly Update for January continues to explore how the effort is playing out in the complex world of biotech product immunogenicity.

In the November/December Update, IPQ took the vantage point of the European regulator – highlighting the advice they are giving on how to handle the immunogenicity assessment challenges and avoid pitfalls in the clearance process for new biotherapeutics, manufacturing changes and biosimilars.

The follow-up story in this issue shifts over to biotherapeutic developers and the intensified efforts they are making to understand the CQA/immunogenicity relationships, improve the predictive power of their CMC toolbox, and design safer molecules. At the least, biotech companies are getting clearer on the gaps to be filled and the effort it will take to fill them.

Also in the CMC arena, the Update for January hones in on the key concerns among FDA regulators about what firms are filing regarding analytical methods.

The IPQ story highlights a revealing list prepared by a lead agency reviewer of the top ten analytical method problems in IND and BLA submissions and the advice he offers on how to avoid them. The advice is worth heeding to help avoid approval delays as well as having to enter the global post-approval change quagmire, which will be described in detail in IPQ’s Monthly Update for February.

Another major IPQ focal point during January was the very full plate facing FDA’s drug compliance office in 2014, including helping to implement two far-reaching pieces of legislation directly in its purview, DQSA and FDASIA, and a reorganization plan tied to the agency’s renewed effort to advance its quality regulatory objectives.

IPQ’s review of these challenges includes a look at the track and trace provisions in Title II of the recently signed DQSA and the tasks involved – having already provided an analysis in the November/December Update of the rapid moves the agency has made to give regulatory flesh to the Title 1 compounding provisions.

Also provided is an update on CDER’s ongoing implementation efforts on the generic drug user fee, supply chain and drug shortage facets of FDASIA, as well as on CDER’s plans to reorganize and realign its quality structures and strengthen its product and facility surveillance capabilities. Helping to inform the story are insights provided by CDER Compliance Office Director Ilisa Bernstein at an FDLI enforcement conference in December.

The issue also includes a dozen “updates in brief” on key regulatory developments around the world.

In focus in the US are: ● a drug shortage report to Congress ● unique device identifier certification, and ● a revision of USP’s storage and distribution temperature requirements.

The European briefs relate to: ● EMA biosimilar quality statistics ● the revision of MHRA’s GMP “Orange Guide,” and ● the EudraGMDP database. 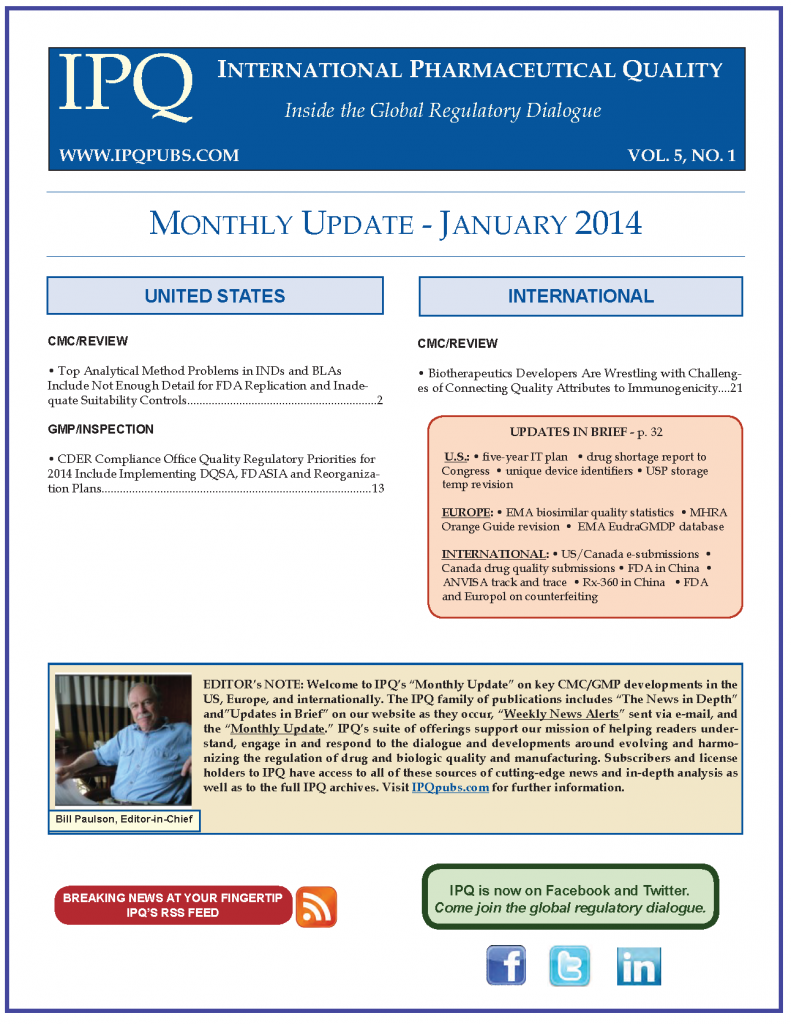