The Monthly Update covering key recent CMC and GMP developments in the US, Europe and internationally is now available.......

Generic drug regulation has been very much in the IPQ spotlight recently on both the CMC review and GMP compliance fronts, with generic drug user fees nearing implementation, biosimilars on the horizon, and compliance problems surfacing at some of the big generics manufacturing operations.

The January Monthly Update begins with an analysis of the impact of generic drug user fees and where the industry and agency dialogue has arrived in crafting a viable agreement on their implementation.

In anticipation of the extra GDUFA resources and the performance commitments that go with them, the Office of Generic Drugs has launched significant initiatives to advance QbD, refine its review processes and implement a quality management system. The IPQ coverage includes a comprehensive discussion by OGD leader Keith Webber on his office’s workload, initiatives and goals as user fee implementation nears.

The next story takes a deeper dive into the current OGD ANDA expectations, where firms are not meeting them, and what agency reviewers are recommending they do to avoid costly delays and expedite the review process.

While refining its review operations for generic drugs, FDA is also preparing the ground to meet the regulatory challenges that their biologic relative biosimilars present. As in the case of generic drug user fees, FDA has been refining its performance goals for authorizing biosimilars based on numerous meetings and extended negotiations with stakeholders. The IPQ story addresses where the agency is in establishing the needed policies and procedures to carry out the Congressional biosimilar mandate.

On the GMP compliance front, generic drug manufacturing issues drew FDA warning letters during the fourth quarter of 2011 at two of the largest generic companies – Sandoz and Mylan. As the IPQ analysis shows, the Sandoz letter is more extensive in scope, encompassing three facilities in the US and Canada, and both oral solid and injectable production.

Sandoz’ parent company Novartis has also been experiencing some bumps on the compliance pathway recently. The IPQ story explains how consumer complaints and an FDA inspection at a Novartis Nebraska facility led in early January to the recall of a handful of well-known OTC products and the firm’s decision to temporarily cease operations at the plant while improvements are underway.

Juxtaposed with the Novartis/Sandoz compliance stories is IPQ coverage of a thought-provoking presentation at a quality systems/ICH Q10 conference this fall by Sandoz CEO Jeff George on the importance of a quality culture to the long term health of a generics company and where he is putting his energy to advance the culture at Sandoz in particular.

International harmonization continues to occupy a central position in IPQ’s field of vision as the new year begins.

ICH’s Q8-10 Implementation Working Group has completed its work with the second installment of its Points to Consider, intended to provide additional insight on some of the key issues raised in the guidelines and answer some of the pressing questions that surfaced during the 2010 series of Q8-10 training workshops.

On the inspection front, FDA and EMA have formalized their reliance on each other’s findings, having built a solid foundation of mutual understanding and confidence.

Our final two stories provide an analysis of where PIC/S has been, where it is going, and the elements that have made this interagency inspection cooperation and training organization a compelling force and harmonization driver in the international GMP regulatory arena. 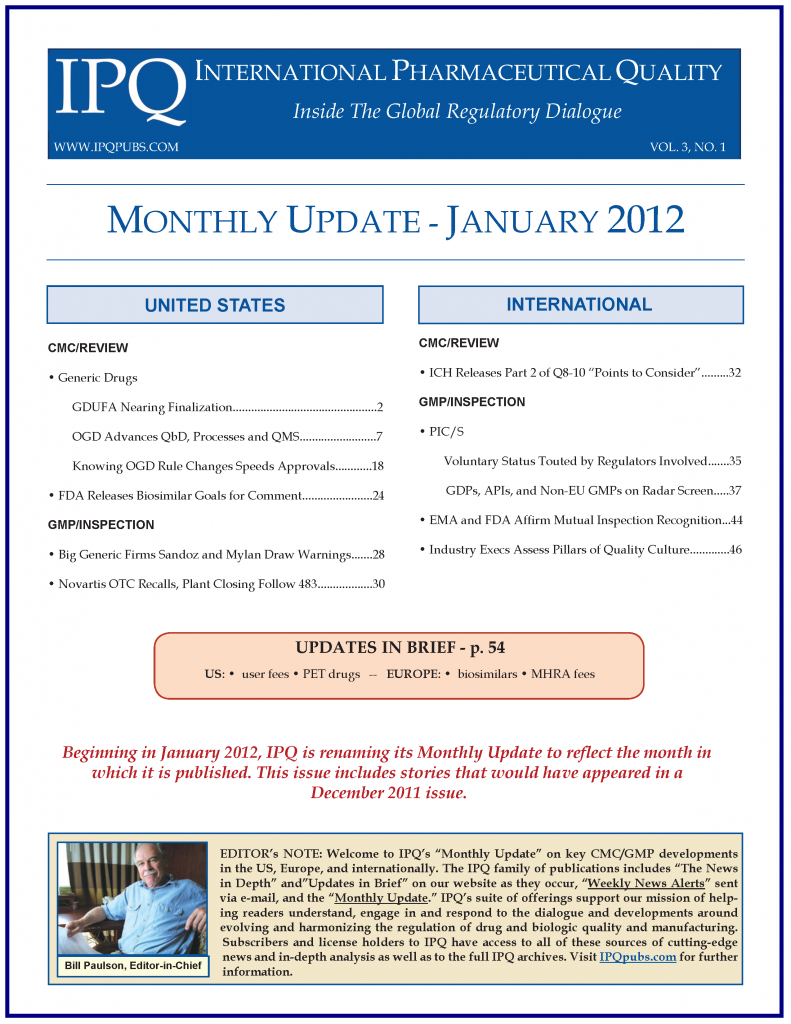