Generic injectable industry compliance problems and their relationship with drug shortages in the US, along with revisions to the EU GMPs and related policies, are two major thrusts of the coverage in the January/February Monthly Update.

Generic injectable industry compliance problems and their relationship with drug shortages in the US, along with revisions to the EU GMPs and related policies, are two major thrusts of the coverage in the January/February Monthly Update.

In the generic drug injectable arena, FDA is wrestling with the challenges of trying to protect patients against the risks of noncompliant manufacturing processes while at the same time trying to assure that they have access to the critical medicines the industry produces.

One of the stories in the series builds on a highly instructive and eye-opening white paper recently published by CDER colleagues Woodcock and Wosinska. The paper addresses the factors at play that discourage the generic injectable industry’s investment in quality and how manufacturing disruptions lead to drug shortages. The IPQ coverage includes an analysis of how the injectable compounding revelations that have been emerging recently interrelate with the generics industry/drug shortage concerns.

Another closely related story focuses on complementary initiatives underway at FDA and the International Society of Pharmaceutical Engineering (ISPE) to gain more information from stakeholders in the pharmaceutical arena that would help in understanding the causes of drug shortages and what pathways might be fruitful to pursue in preventing and mitigating them.

The series also includes a deep dive into the compliance problems at two of the major producers of generic injectables – Hospira and Ben Venue – and the impact they have had internally as well as on the supply chain. In Ben Venue’s case, the problems have resulted in a consent decree, announced in late January.  Hospira, meanwhile, has embarked on a self-imposed, aggressive regimen of remediation efforts and quality system improvements that include a QbD slant, as the story explains.

Europe, meanwhile, has been taking a hard look at its GMPs and is making revisions to better communicate its compliance expectations for current focal points of concern such as supply chain oversight, shared facilities, process validation, QP batch release, starting materials, lab method transfers, and, of course, investigating and reporting quality defects.

The first story in the Europe section provides an analysis of the revised drafts of four GMP chapters just released for comment by EMA and an update on its annex revision efforts.

A second story delves further into EMA’s effort to refine its Annex 16 on QP certification and batch release – piggybacking on a recent update by Finnish regulator Anne Junttonen, who is leading the effort. At issue is how the QP can and should come to grips with the complexities of a globalized supply chain and more technically sophisticated applications in putting his/her name on the line that a batch meets CMC and GMP requirements. Member state differences in interpreting Annex 16 and related directives are also drawing the EMA working group’s attention as the revision proceeds.

Also provided is an analysis of the three prongs in EMA’s current effort to strengthen its process validation guidance portfolio.  Reviewed is the development of a pair of guidelines on what the agency wants to see regarding PV for biotech substances and for drug products in marketing applications. The third prong is a revision underway on GMP Annex 15 to reflect changes in technology, changes to the EU GMPs, the incorporation of ICH Q8-11, the two new EMA PV submission guidelines, and the FDA and WHO PV documents.

On the European front, another focal point is some important upgrades EMA is making to its EudraGMP database regarding manufacturing noncompliance, wholesale distribution authorizations and GDP certificates to expand the usefulness of the database for both regulators and industry in the EU and globally.

The Monthly Update concludes with a review of the step forward in the international dialogue on regulating biotech products taken at a CASSS biotech CMC Strategy Forum held in Tokyo in December.  The forum brought together industry and regulator experts from Asia, Europe and the US to benchmark on current biotech regulatory policies and trends and to compare ideas on how and where further cooperation and convergence should be sought.

The IPQ coverage highlights some of the contributions that were made in the presentations and panel discussions at the forum on biotech regulatory trends and the specific regulatory challenges posed by glycosylation, biosimilars, MAbs, and QbD. A better understanding of glycosylation drew attention in particular as a key to advancing the international dialogue, as the story explains.

Included in the Monthly Update are briefs on: ● CDER’s release of guidances due out in 2013 ● EC’s release of the outcome of a late-2011 variations consultation, and ● India’s publication of guidelines for API export into the EU under the FMD. 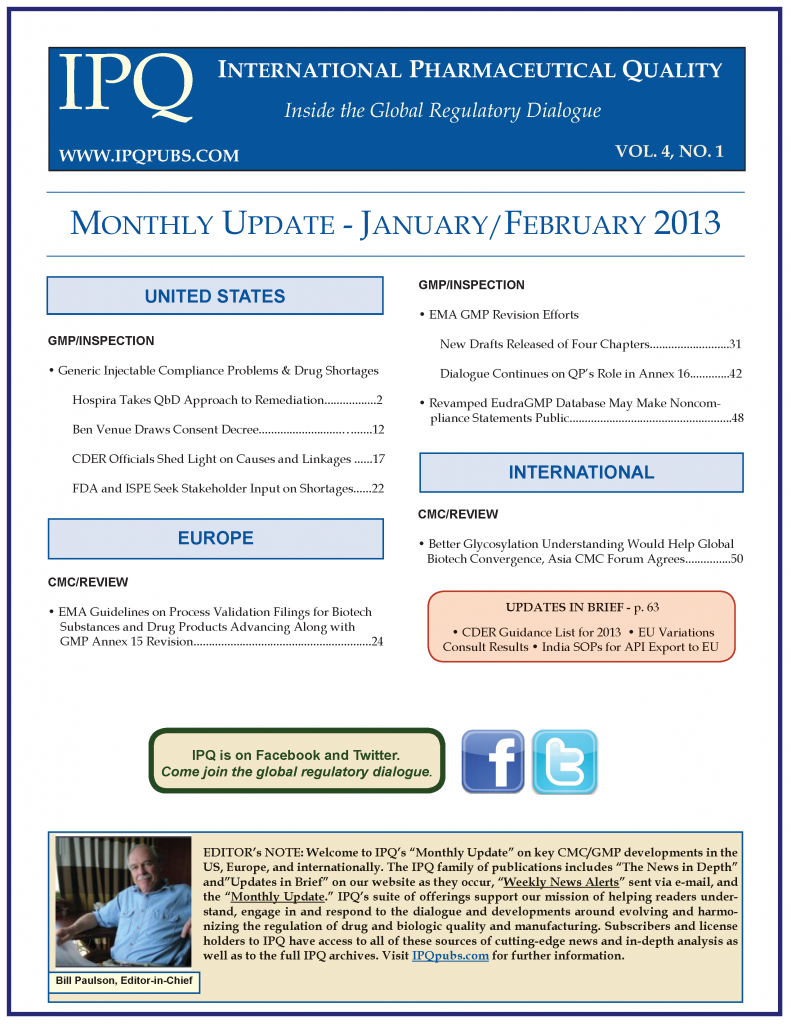