The December Monthly Update includes additional coverage of the developments and revelations that have been forthcoming since IPQ released its in-depth special report on the “Current Crisis in Pharmacy Compounding and its Implications” in early November, along with updates on Q3D and FDA inspection of CMOs.

The December Monthly Update includes additional coverage of the developments and revelations that have been forthcoming since IPQ released its in-depth special report on the “Current Crisis in Pharmacy Compounding and its Implications” in early November, along with updates on Q3D and FDA inspection of CMOs.

On the compounding crisis, the December issue includes stories highlighting:

● FDA’s intensive review of NECC’s sister company Ameridose and the findings that it was operating its large-scale sterile compounding operations in a similarly non-compliant fashion, and

● a review of developments in December that include – the state of Massachusetts closing more sterile compounding operations as a result of its intensified inspection program; federal grand jury and FDA probes into potential criminality at NECC; reports of new types of infections in patients who received the tainted steroid injections; and FDA’s meeting with the states to look for how to best close the regulatory oversight gaps.

The December Monthly Update also provides a ground level view of how a lack of communication between sponsors and contract manufacturers can create problems during the FDA inspection process, with serious repercussions for the sponsor and the CMO.  There is much to heed in the cautionary tale told by an expert investigator as she follows the thread of a supply chain to the Arctic Circle.

On the international harmonization front, the broad-impact ICH effort to develop meaningful standards for the assessment, content and control of heavy metals in pharmaceuticals is coming closer to fruition.

The December issue includes an update on the progress the ICH Q3D Expert Working Group has made on its “elemental impurities” guideline and explains where the EWG is looking for further input in applying the risk-based principles underpinning the guideline and building a viable consensus. The story also explores the linkages between the ICH initiative and USP’s effort to upgrade its heavy metal standards and the ongoing discussions to make sure that the results align in content and timing. 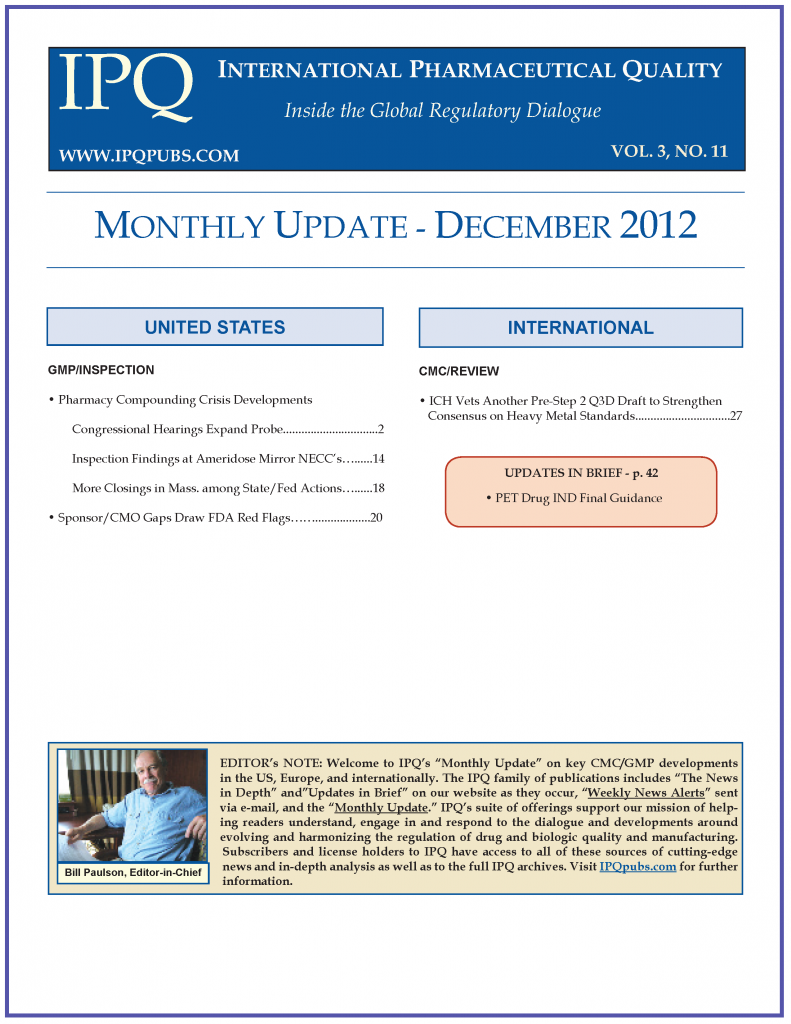