Prominent among the CMC/GMP developments in September was a well-thought out proposal from a team of prominent industry experts on how to alter the current CMC submission process to encourage transparency and continuous improvement and to incentivize and reward the advancement of QbD. The proposal has high relevance to ICH’s nascent Q12 initiative on life-cycle management.

Central to the PhRMA team’s proposal, which was presented at the September PQRI/FDA conference by Pfizer’s Roger Nozol, is embedding a “comprehensive” control strategy into the quality overall summary, which then defines the regulatory commitment. The proposal, the IPQ story notes, echoes the concerns that team member Moheb Nasr has voiced during his tenure at ONDQA, as a participant in the ICH Q8-10 development and implementation process, and subsequently as head of CMC global strategy for GSK.

Also reviewed are presentations by two CDER officials at the PQRI session, which reflected their familiarity with and openness to the ideas PhRMA is putting on the table.

In the next story, IPQ returns to the rapidly evolving regulatory picture for generic drugs in the US in the wake of GDUFA user fees.

The efforts of the generics office to clarify and streamline the review process continued during the summer with new draft guidances addressing post-approval supplements and easily correctable deficiencies, dosage form bioequivalence, and user fee waivers/reductions. Also released was an update on changes being proposed to OGD’s QbR approach – which has important ramifications for innovator applications as well, as our story notes. The story also reviews an international generics review initiative led by the EU.

Analytical technology is fast moving, particularly in the biotech field, and continually pushes up against existing regulatory policies that are much less fluid.

A third story in the IPQ August/September issue places you squarely at this intersection and sheds light on what the tensions look like and what adjustments need to be made to ease them.

In focus is Amgen’s “analytics of the future” initiative and the compelling mass spec-based multi-attribute methodology it has developed, with the potential to dramatically simplify, while significantly empowering, the analytical processes for biotech product characterization, specification-setting and routine QC testing.  The firm’s Tony Mire-Sluis, a former FDA biotech policy expert, has a lot of insight to offer on the methodology as a driver for the next stage of quality by design and the regulatory challenges and opportunities it presents.

The July Monthly Update delved into some of the broad-based efforts that regulators, pharmacopeias and industry are making to better understand and address the threats to product quality from an increasingly convoluted and globalized supply chain.

In this issue, we home in on how Amgen is taking the available wisdom and crafting a supply management program strong enough to forestall disruptions and heighten quality assurance.

The story provides insights into the various facets of the Amgen program from its Quality VP Martin VanTrieste.  He played a pivotal role in the development of Rx-360, and his work with the consortium has enriched his and Amgen’s understanding of the supply chain vulnerabilities and the organization, processes, and technologies that need to be in place to make a supply management program effective.

The in-depth stories in the issue are accompanied by more than two dozen “updates in brief.” IPQ’s briefs include links to related IPQ coverage and to the documents referenced, and are intended to keep subscribers informed on all of the significant developments in drug and biologics quality regulation worldwide as they are occurring. 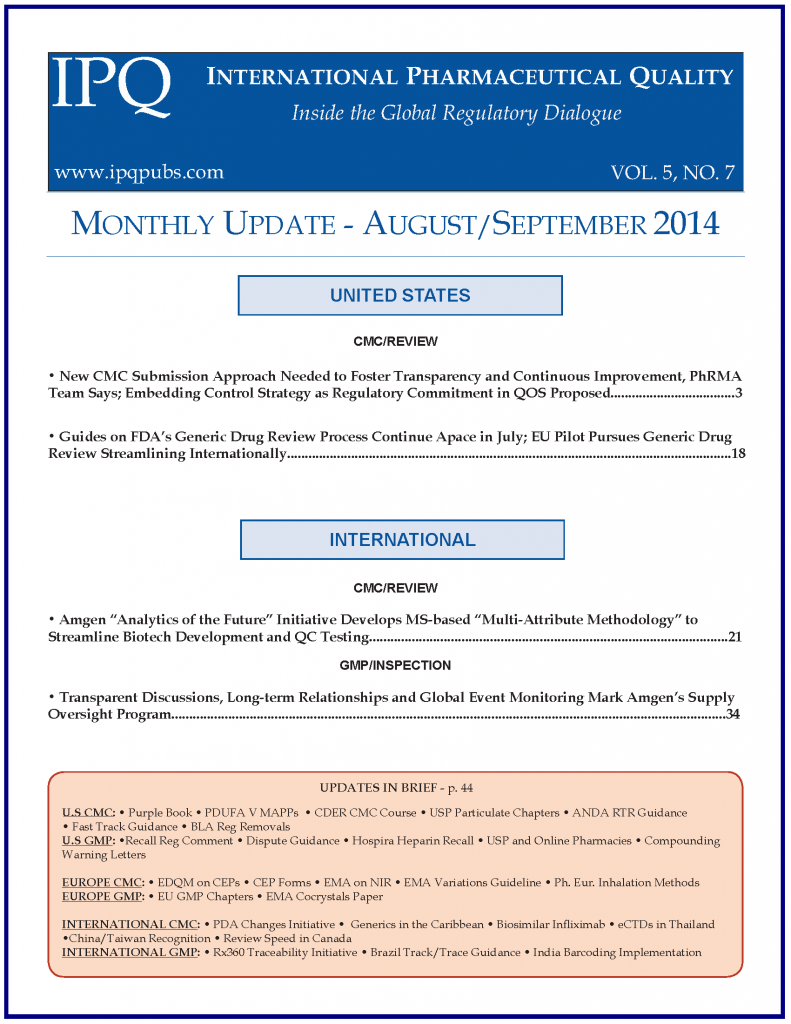