Regulators are refining their inspection mechanisms for uncovering risks and are looking for industry to do the same internally. Under the new regulatory paradigm, not defining manufacturing risks will be viewed as high-risk behavior. The April Monthly Update includes a close look at key developments in the quality risk management (QRM) arena.

On the international front, PIC/S has released an important new guide to assist GMP inspectors in assessing industry’s implementation of QRM and to help promote a harmonized approach among PIC/S member agencies, which now include FDA. The IPQ story also delves into how MHRA is applying a risk-based approach in its inspections.

The lead story in the US section of the April Update provides insights from a panel of FDA compliance experts on the continuing agency concern with manufacturers that use conventional aseptic processing and can’t demonstrate that the heightened risks of the old technology are under control.  Included in the panel discussions was what investigators are concerned with in their reviews of both the conventional lines and the newer isolator and RABS technologies.

The second story in the section offers an intriguing slant on the relationship between the compliance problems of injectable manufacturers and the growing problem of drug shortages provided at a recent ISPE conference by an important player in plant valuations and sales. The moral of this insider’s tale, as the IPQ story reveals, is that it is risky not to invest in quality – and not just in terms of the expense of compliance problems, but also in terms of the market value of the facility itself.

The first explores the causes of FDA issuing a warning letter to another major generic injectable manufacturer – in this case, APP – despite the agency’s deep concern with drug shortages, which have followed from other of its injectable compliance actions.

Two other FDA efforts drawing attention in the April issue are:  ● an internal SOP designed to help the agency address the public health risks posed by cargo theft, and ● a final guidance on PET drug media fills that gives a little more breathing room to manufacturers on completing their new drug filing requirements.

Also on the international front, USP has announced plans to extend its effort to help sub-Saharan Africa better assure the quality and integrity of its pharmaceutical supply with a new training/laboratory center slated to be located in Ghana.  The IPQ story links the USP effort with a new report from the Institute of Medicine that explores the weaknesses in the regulatory processes of countries in the region and other less-developed areas, including the lack of lab infrastructure.

Included in the IPQ “Updates in Brief” section of the issue is coverage of: ● the new Ranbaxy site in India that will begin shipping generic Lipitor to the US ● the shortage of some veterinary drug products resulting from Novartis/Sandoz GMP compliance problems, and ● a bill drafted in the US House of Representatives to help prevent drug shortages. 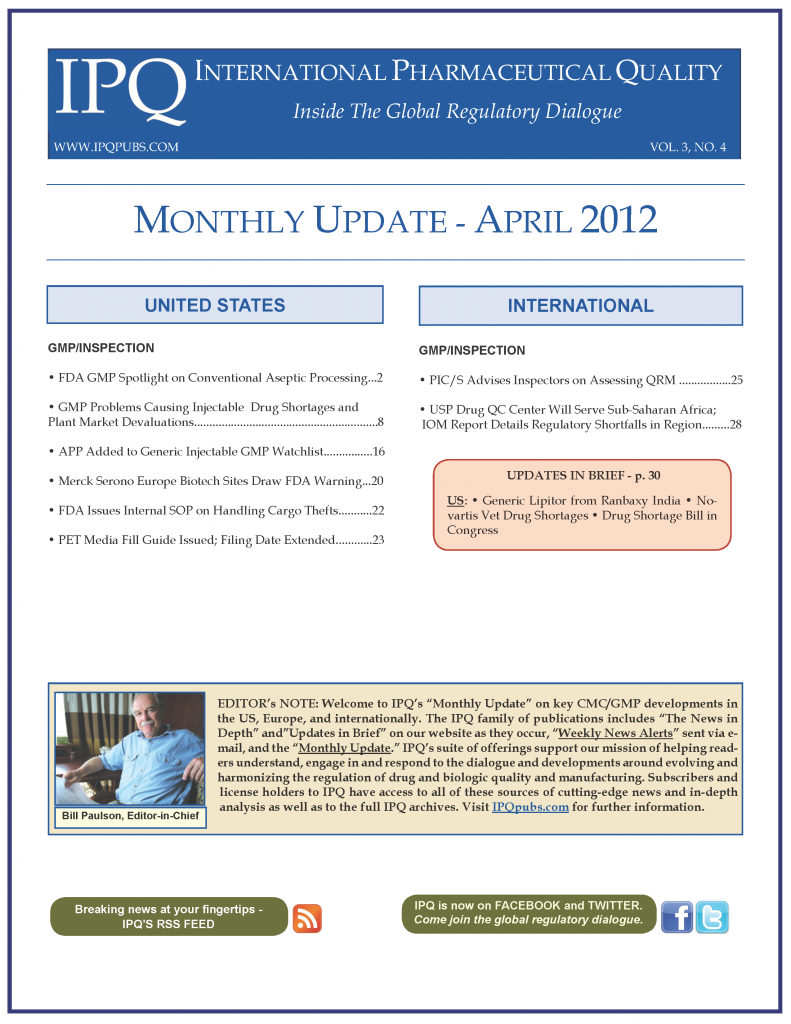